Have you seen this? The truth about the Unemployment Situation 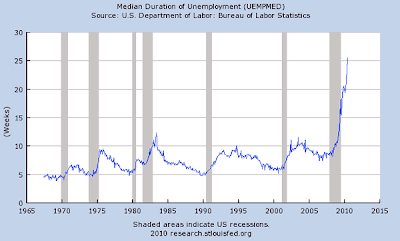 If we look at the data from this statistical data set, what we see is a systemic meltdown of our current job market attributable to occupational displacement, which I believe relates to the destruction of the manufacturing capacity of the United States. The effects of this meltdown show that the median duration of unemployment has been over 9 months for every month from June 2008 to present (and over 10 months from August 2008 to present with the exception of 1 month). The latest data reaches a peak of 25.5 months in the June 2010 and appears to be continuing to climb.

Do you understand this? It means that any semblance of any media outlet telling you that unemployment rates are falling is complete and utter bunk!

The unemployed are basically out of luck and the government and newspapers are more interested in a song and dance routine than squaring up to the facts. So if these media outlets are going to keep up this charade, then it is time to find relevant sources of information. I'm not here to play charades. I am here to enlighten you to the truth of what is going on around us. I am facing it and I hope that you will join me, if you haven't already.
Posted by James Thomas Shell at 1:32 AM