Agenda about the City Council meeting of April 1, 2014

Not much of interest at Council last night. Mayor Wright and Alderman Meisner were not present. This meeting lasted less than an hour. I continue with the item of interest from the Consent Agenda.


1) Consent Agenda "Item C". Looks like they are going to find a way to finance the renovation of the "Olde Hickory Mill" building. You can see this building off to the left when traveling south on Hwy 127 after passing the Railroad underpass.

The Hound's Notes - Bob Vollinger informed me at City Council tonight that this is the Historic Lyerly Mill. According to this website it is being marketed as a $12 million mixed-use property with Delphi Development, Zapolski Real Estate LLC.

This property is part of the Wingfoot District that was proposed by Pete Zagaroli back in 2010. This is the third redeveloped property that falls within that footprint; as does the proposed $27 million Main Avenue project.

From the City Council meeting of January 5, 2010


3. Council Discussion Regarding “Wingfoot District” Redevelopment Plan; a Business District and Association Promoting Economic Development Through Residential, Commercial and Industrial Redevelopment - The Wingfoot District concept was briefly presented to City Council during its recent Council Staff Retreat in December, 2009. Since then, discussion has continued regarding planning for the redevelopment of the area between Highway 127 and the new Lenoir Rhyne Boulevard, encompassing certain areas. Pete Zagaroli envisions a partnership with the City of Hickory and private investors to develop a design plan for redevelopment including improvements to public infrastructure. This plan does not fall under the guidelines of the City’s Vacant Building Revitalization Grant, but City Staff recommends the City consider the concept of redevelopment planning since one of the goals of the Operation No Vacancy initiative is to create redevelopment plans for sub-areas within the Commercial Revitalization Area. Staff recommends that Council discuss and identify policy issues related to the City expanding it’s revitalization efforts to include design planning and financing methods and partnerships to implement plans for public infrastructure improvements in redevelopment areas.


Pete Zagaroli addressed the council, he stated that he was coming before the council as both a citizen and a designer. He is looking to create some synergies to spur economic development in the area and move things forward. His focus tonight was on conceptual ideas.

The name comes because the district area he is looking to revitalize is in the shape of a winged foot. In the district, there are eight buildings that are historically significant to the textile and hosiery industry. His concept involves the history, but it is not a historical district that he is promoting. He is promoting a business district that promotes economic development through residential, commercial, and industrial redevelopment. The area is around Lenoir-Rhyne and Mr. Zagaroli believes that is is the most significant gateway into downtown.

He based the model on Downtown Durham (which is seeing a renaissance). The district would tie the university to downtown. It will create a better gateway to downtown. the historical significance would tie in with our current historic districts and promote them and future preservation. The importance comes from the private sector. In the district, owners have spent money on drawings and redevelopment. As an estimate, the expenditures have been in the $300k-$400k range. He would like to see the city to appropriate funds towards the design work of the infrastructure within the district. He feels the private investment has to start first.

The proposed redevelopment expenditures are $11,213,714 and another $2.9 million on top of what has already been done. To isolate an area creates exclusivity. More than anything this will expedite the private investment. There is no commitment to put the infrastructure in place, only a commitment to design. If successful here, then it can be implemented elsewhere in the city. He is not meaning to slight other areas in town, but he feels this is the most important area as far as gateways.

Alder Fox thanked Mr. Zagaroli his enthusiasm and stated that she thoroughly enjoys his plans. She asked if Mr. Zagaroli had looked into how Durham had financed their downtown revitalization? Zagaroli stated that he had not, but he has intentions of doing so next week. Time is critical and this area needs a morale boost. People don't always believe what they hear and read, but they believe what they see. If we can have something tangible, then this is an overall goal that he can show a potential client. He knows that they have a lot of work (to do), the city is feeling the pain that we all are feeling. He thinks if we can find some momentum. The private sector is looking to move forward. They need the end users a reason to come here. We need to focus where it will be noticed first and the momentum can work outside of that. If we try to fix the overall area or problem, there are 700 empty buildings in Catawba County; that is too daunting a task. Let's try to fix 20 buildings and that can move outward. Then move over to west Hickory. The reason why the initiative hasn't worked on the west side is because the initiative needs to come from the private sector. The people in his district are ready to move on this and make it better, If you know that your neighbors are ready to invest and raise the value of their building, then you are going to be more willing to invest in your own property. The public part comes after that.

He is meeting with Federal and State officials to see what grants are available through them. Any money left over will be spent on aesthetics. Sewer, water, and other infrastructure is already available. If you put $2 million into raw land, it will go towards infrastructure and then there is not much left. These redevelopment projects are diamonds in the rough.

Alder Patton asked if they had applied for Operation No Vacancy grants? and he stated that they have. Further conversations went into Grants available. And Mr. Zagaroli stated that he hoped the city would not look at this as "Zagaroli Construction." What he is looking for is help with infrastructure. It is up to private business to development their building, but it is the city's responsibility to create the streetscape. He understands that everyone in afraid (of investment), but he feels that we can create morale and momentum, and give a reason to reinvest in ourselves and our community.

Alderman Lail stated that there was no doubt in his mind that with the completion of 8th street NE, that bisects this district, city council should have input on what this does look like. If we can create the district that is special and unique, then it has potential for these old buildings. Zagaroli says that this can be the ultimate in mixed-use. He wants to see it truly incorporate all of the facets. This will work within the city's protocol and guidelines from day one. These funds would be qualifying and based upon expectations.

Alderman Lail interjected that he might be piggybacking on what Sally stated earlier. There is a mechanism that city council has to facilitate this kind of development. It is called Business Improvement Districts (BID). It is a true public-private partnership that has demonstrated success throughout the State of North Carolina. Alder Fox stated that she was going to instruct staff to call Durham and find out what kind of financing they use. Durham's downtown district is huge, There are BIDs in more than just downtowns. They are in historic and business districts and it is a true public-private partnership. She believes that Mr. Zagaroli is a little ahead of council, but they are looking for means to finance these types of areas. There is a rural grant that is population specified (the Rural center Pre-Development Grant). She wants staff and council to look into these grants.

Mr. Zagaroli stated that he would do anything to move this forward. He would look into whatever grants are available, but to be frank, he can't keep moving forward on this gratuitously. Alder Fox stated that they needed to find this out and they need to do their homework and it may take a couple of months to do that homework. Alderman Lail sated that this idea is great because it focuses on the heitage of our Furniture and Textile history. Mr. Zagarili stated that this is part of a bigger picture. This isn't just about Hickory, it's about the region. There is 110 years of our history locked up in these buildings that can be lost forever. The story can create a novelty and interest. That can get people to move here.

This is about communication and moving forward and trying to achieve the same goal. He would move forward on this himself, but he cannot afford to. He wants to move forward as quickly and efficiently as possible. The council decided to discuss this issue at the same workshop in which they will discuss graffiti. Further Manager Berry asked the council to think about prioritizing some of these agenda items at the upcoming retreat. 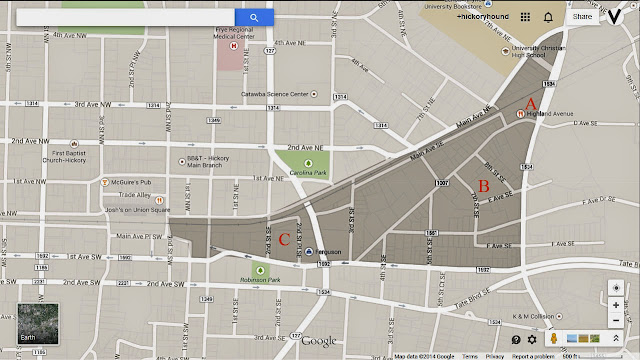 Posted by James Thomas Shell at 1:25 AM

Maybe i am misunderstanding here. But do this public private renovation at lru area first andthe move to west hky. But a pot etial problem with the private sector business involvement/money? Yep. We are economically in the hole over here. No big grocery store will move over here. Just now getting some forward movement after ?20? Yrs of the old southern desk structure/dilapidation. City will most likely tear down our gym next year. Taken our pool. The council is gonna talk about graffitti problem and wonder about violence etc. yet they keep taking from our kids etc and giving nothing back. Yet talk bad about us. Accuse many of us as trouble makers. Appoint none of us to committees so we can have a sayso. And want cooperation and money from us? Am I misunderstanding this stuff?