This Agenda is about the Hickory City Council meeting that took place on the date listed above. City council meetings are held on the first and third Tuesdays of each Month in the Council Chambers of the Julian Whitener building.

At right of this page under Main Information links is an Hickory's City Website link. If you click on that link, it takes you to our city’s website, at the left of the page you will see the Agenda's and Minutes link you need to click. This will give you a choice of PDF files to upcoming and previous meetings.

Here is a summary of the agenda of the meeting. There were a couple of important items that were discussed at this meeting and the details are listed further below: 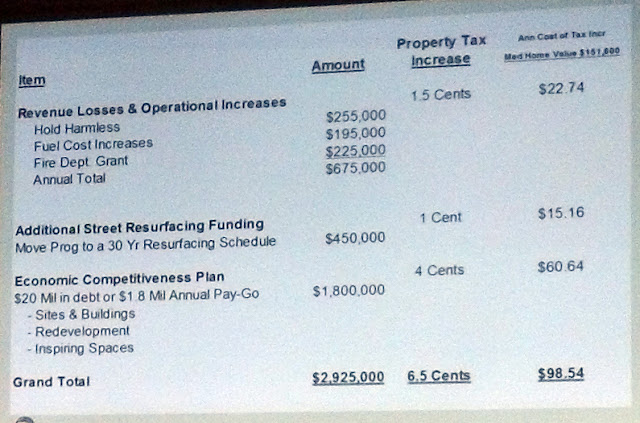 *** The issue is the proposed property tax increase coming on Tuesday night that will be part of the City manager's proposed budget.

Here are a some thoughts and questions on the proposed property tax increase as it relates to Hickory Inc.'s Inspiring Spaces Initiative.

Think back to last year, when Mayor Wright was pushing the Prepared Food Tax as the be all end all and all that was needed to fund the Inspiring Spaces projects. Now we know that it wouldn't have covered what they have talked about over the subsequent half a year, since the local municipal election occurred.

Now knowing that the Prepared Food Tax wasn't enough, they were willing to compound the mistake. We would have had this food tax and it wouldn't be covering the cost of Inspiring spaces, so they had every intention of raising your property taxes for Inspiring Spaces all along. What happened to the investments that were supposed to come from the Federal government? the State government? or through the Private sector?... none of that has been talked about recently.

Remember the Farmer's Market project that turned into the Sails project. It started out at $285,000 and within months became a $420,000 project and Hickory Inc. will admit that it is right at a half-million dollar project and we know that more monies have been spent on the structure to maintain and add to it. What if they underestimate the cost of this proposed project. This isn't a small structure like "The Sail's". This is a $40 million bond with ambiguous projects attached. There are still no specifics. We've been down this path before folks.

What if raising these taxes doesn't generate enough money for what is proposed? Hickory Inc. says oops and scales back and does the Linear Park/Sidewalk and whatever they want and you have no choice about it. There are no second chances. It, in essence, becomes the largest slush fund in this city's history; creating, according to the City Manager's numbers above, about $3.6 million per year for Hickory Inc. to spend as they see fit.

Hickory Inc. intends to pass this budget and then they will be holding meetings called "Citizen Briefings" to push the bond referendum. The "Briefing" that is online is long on vagueness and short on specifics. People don't need a pep talk to tell them why this park is a good thing. They need specifics. Tell the people what the projects will cost and what they will have to sacrifice to invest in these projects. They need to understand the trade offs. City Manager Berry and Assistant City Manager Surratt are supposed to be managers not sales people. Elected officials can do that, but that isn't the job of bureaucrats to sell projects. Think about what happened the last time a project was committed to that wasn't fully vetted?

And Guess what? If future economic development does take place, any new businesses looking to come here are going to want additional incentives, like two recent projects where those companies will pay no property tax on their buildings for the next 7 years. So the revenue pie isn't growing, but the outlay/expense pie continues to grow. Companies will expect some form of incentives, which will increase the burden on residents through their property and the taxes they pay on it.

Persons Requesting to Be Heard
A. Dan Green, In House Counsel for Meridian Senior Living, Information Regarding a Golf Tournament for National Alzheimer’s Awareness

D. Call for Public Hearing - For the Consideration of a Street Closing Petition for portions of the former Hickory North Crosstown Loop and 13th Street NE, Hickory. (Authorize Public Hearing for June 17, 2014)

E. Citizens’ Advisory Committee Recommendations for Assistance through the City of Hickory’s Housing Programs. - The following request was considered by the Citizens’ Advisory Committee at their regular meeting on May 1, 2014:
 Kathy Jeannette Kendrick Higgs was approved for recommendation to City Council for first-time homebuyer’s assistance to purchase a house located at 170 12th Street Court SE, Hickory. She had requested $5,000 for assistance with down payment and closing costs. The First-Time Homebuyers Assistance Loan is zero interest, no payments and repaid upon sale, refinance or payoff of first mortgage. Funds are budgeted for these items through the City of Hickory’s former Rental Rehabilitation Program income received in FY 2012 and/or program income received through the City of Hickory’s Community Development Block Grant Program.

L. Capital Project Ordinance Number 4.
1. To budget a total of $54,307 of State ($13,577) and Federal ($40,730) in the Water and Sewer Capital Construction line item. These FEMA funds are budgeted for damages to the Rock Quarry Sewer Outfall as a result from the August storm and flooding event.

M. Capital Project Ordinance Number 5.
1. To budget a total of $400,000 of State ($100,000) and Federal ($300,000) in the Transportation Storm Damage Repair line item. These FEMA funds are budgeted for damages resulting from the August storm and flooding event.

N. Capital Project Ordinance Number 6.
1. To budget a total of $195,363 of State ($48,841) and Federal ($146,522) in the General Capital Construction Project line item. These FEMA funds are budgeted for damages to the Pinecrest Drive Culvert resulting from the August storm and
flooding event.

O. Capital Project Ordinance Number 7.
1. To budget a total of $1,500,000 of State ($375,000) and Federal ($1,125,000) revenue in the General Capital Construction, Design and Miscellaneous Windridge Bridge Project line item. These FEMA funds are budgeted for damages to the Windridge Bridge Replacement as a result of the August storm and flooding event.

New Business - Public Hearings
1. Consideration of Amending Chapter 2, Article 8, Youth Council, of the Hickory City Code of Ordinance of the City of Hickory by Amending Sections 2-240, 2-242(a)(c), and 2-245. - The Hickory Youth Council is a group of 25 High School students that provide input to City Council, Staff, and other Boards and Commissions on youth issues. Members learn about City government and perform community service projects. Every year the Council receives far more applications than there are open positions on the Youth Council. The Youth Council reviewed the proposed ordinance revisions at their April 14th meeting and recommended approval of five additional Youth Council members. Staff recommends that City Council approve the amendment to the ordinance to expand the Youth Council membership from 25 to 30 members. This public hearing was advertised on May 9, 2014 in a newspaper having general circulation in the Hickory area.

2. Voluntary Contiguous Annexation of 1515 Cloninger Mill Road NE, Hickory. - Mr. Bobby Hedrick, and wife Patsy Hedrick, have submitted a petition for the voluntary contiguous annexation of .3963 acres of property. The petitioners are requesting annexation in order to connect to the City of Hickory’s sanitary sewer system. The property currently serves as the Hedrick’s primary residence.This public hearing was advertised on May 9, 2014 in a newspaper having
general circulation in the Hickory area.

New Business - Departmental Reports:
1. Call for Public Hearing on the City Manager’s FY2014-2015 Recommended Annual Budget. (Authorize Public Hearing for June 3, 2014, at 7:00 p.m. in Council Chambers of the Julian G. Whitener Municipal Building. The 2014-2015 Recommended Annual Budget has been distributed to City Council as required by law and is available for review in the Office of the City Clerk, Patrick Beaver Memorial Library and Ridgeview Library.
Posted by James Thomas Shell at 4:36 AM