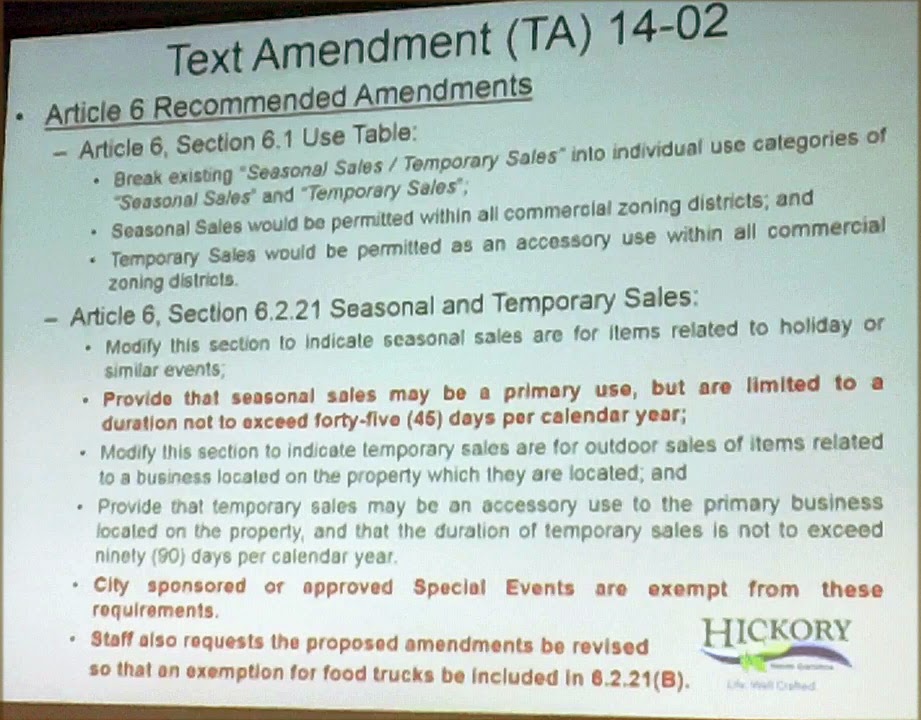 Planning Director Brian Frazier read from the above Powerpoint slide. The proposed amendment takes into consideration temporary and seasonal sales, such as Halloween Pumpkins, Christmas Trees, and July 4th Fireworks. It will also have no effect on any Agricultural sales (exempt). This will not effect City approved events, such as the Farmer's market, Oktoberfest, etc. as long as you have a special events permit. There is also a proposed amendment to allow food trucks. Businesses having a temporary sale for their items will be fine. Circuses, Carnivals, etc. will be fine.

What will not be allowed/will be prohibited is a truck selling Black Velvet Elvis painting, furniture, carpets. Maybe they have permission from the property owner, but they aren't going to get permission from the city. If you have a privilege license and are in a structure, you are allowed to do what you want to do.

Alder Patton asked about the objections of the two people on the planning commission that voted against the proposed amendments.  Mr. Frazier stated that they believed that this was anti-business and would have adverse effects on start-ups. One commissioner stated that MDI started as a fruit and vegetable stand. One mentioned the effects on the Mall, who have tent sells and the loss of rent. This will effect small business more than large business. Alderman Seaver asked about lemonade stands? Mr. Frazier stated that, 'It depends on what jurisdiction you are in and he will leave that to the Health Department.' Alderman Zagaroli asked about someone wanting to sell rugs and working with a property owner? Mr. Frazier said that would not be allowed. Alder Patton asked about enforcement? Mr. Frazier said that they do have a planning officer and if this happened during the week she is pretty responsive. There is a concern about weeks, because no one is on duty. Alderman Meisner and Alder Patton concurred that most of the time it is going to be on the weekend. Mayor Wright made a comment about "every once in a while' schedules maybe being altered.

Larry Pope objected to the amendments. His general reasoning was that private property owners have given permission for someone to use a portion of their property and they already pay taxes. The property owner is giving that person the ability to earn a living. It can also bring business into the business that has granted permission.  He equated it to a school yard bully that wants to stop an individual from doing something that they have the right to do and they aren't breaking the law. The city does not own the property. He seeks a workable change or the ordinance should be left alone.

During the Council discussion, Alderman Meisner seemed to be worried about the Lails having a furniture store and having to pay a lot of taxes and having to compete against someone who would put furniture in a parking lot and not pay sales tax, privilege tax, or property tax. Alder Patton took the opposite view and spoke about this adversely effecting small business and start-ups. She went on to say that this should have been brought up in a work shop and not crammed in at the last minute. Meisner went on about people coming in and leaving and there are no guarantees that they are going to be around or guarantees on the product... Patton said they may be filling a need that other stores and establishments don't fill. Alderman Lail spoke of the fairness and equity issue. He talked about the visual impact... the visual scene and appropriateness for what they are trying to do as a city. These people want to be on key corridors. Mayor Wright talked about regulations that provide restrictions on how people use/misuse their property.

Alderman Lail gave an example of puppies being sold in a cage on the side of a road. Alder Patton stated that she called the police about that and took care of it today. She said that this wasn't enforceable.

The Council voted 6 to 1 (Alder Patton) to approve the amendments.

Hound Notes: Kudos to Alder Patton for being pro small business and middle class/working class on this issue. In typical fashion of late, we see the status quo from Aldermen Meisner and Lail protecting the big corporate retail businesses and property owners over the free enterprise of the the individual and what America was built on.

Like what I have seen from the Chamber of Commerce, these people haven't seen a tax or license that they don't support. They talk all day long about excessive regulation and then the first thing they do is run to local governments and lobby for more regulation. Including the Mayor, they have bemoaned the State legislature that has looked to rein in this very regulation (privilege licenses), because it has been having a negative impact on the small business individual. They can't seem to grasp it.

Alder Patton gets it right when she talks about some of the products that are provided by these temporary sales -- the sunglass salesman and she gave another example. You see sales such as these in Charlotte and other cities all the time, but oh no, "cain't be competin in Hickry."

My issue is what I spoke of in the comments related to this issue on the Agenda article. Out at the Springs Road Food Lion, there are people that have a yard sale on Saturday at the top of the parking lot. They aren't in anyone's way and they aren't bothering anyone. These people are just trying to make a little side money in a stinky economy. I'm sure that if they didn't need the money, then they wouldn't be there on a Saturday. They are there for visibility, and which is better, them being there and people having access to what they are selling or people driving through a neighborhood. Oops, they'll wanna put a stop to that next.

There were also other Canards like the unfair competition versus the Lail's. People buying furniture in a parking lot aren't the same client base as those shopping in the Hickory Furniture Mart. And the Lail's aren't furniture retailers. They are property retailers. Someone isn't going to go to the Furniture Mart, because they can't buy a sofa in a parking lot. Then as for someone selling puppies on the side of a road, that is an animal control issue. I highly doubt that is legal in any form or fashion and if it is, then I would support an ordinance against that.

Lastly, if this isn't enforceable, then what are we doing here? More regulation to be arbitrarily enforced when some bigwig gets their drawers in a wad.

2) Cal Overby presented a scoring mechanism for Considering Grant Proposals under the City’s Community Appearance and Landscape Grant Programs. The scoring sheet was on a  Powerpoint slide that I will need to reproduce in the newsletter. This is a good move and will keep the grants from being gamed going forward. There has been an issue of certain individuals receiving grants multiple times and monies running out quickly in the budgetary cycle. Hopefully these criteria will address those issues.

This is what is hurting Hickory. While I applaud those, like Mrs. Patton who are concerned about start ups, temp businesses etc. Mr. Meisner's comments show he has no knowledge of what is happening in retail and food marketing. The mall uses a lot of temporary kiosks, that sell Valentines gifts, Easter items Halloween costumes and decorations or just trendy items for a short time and then they are gone because the demand is gone. Product runs on some items are now very short and what sells changes rapidly.

The economy no longer runs on brick and mortar stores that are expensive and are there for a hundred years. No one can tell me what commerce will look like a century from now. Smaller nimble niches are an important part of the economy and for Hickory to not recognize this or encourage this is simply backwards and dumb.

To be frank, a business person is not concerned about paying the most taxes they can pay to the City, they want to make money. And for many niches, it doesn't make sense to build a multimillion dollar building to sell a few thousand dollars of product. Maybe the Furniture store that Mr. Meisner spoke of doesn't have the styles or the pricing the customers want. The City will have to figure out how to adapt tax policy to the new economy, not vice versa.

Central planning didn't do much for the Soviet Union and we don't need it here. We are in a nimble, fast changing economy and 20th century city policies won't help the 21 century economy.