42.3% of the people in Catawba County have a job

42.3% of the people in Catawba County have a job. That is an approximate number based upon the numbers from the Bureau of Labor Statistics. The spreadsheet is in the link below.

In 1990, when these official statistics began, over 58% of the people in Catawba County had a job. The current actual participation rate (Total Workforce/Population) is 45.6%. It has fallen from over 61% of Catawba County's residents being in the workforce in 1990 and 1991.

Look below at the past year and see how drastically the Labor Pool (Workforce) has fallen. At the same time, the officially unemployed has fallen from 8,584 to 5,141. With both falling, one can see how the conclusion is reached that those 3,400+ people are permanently unemployed and we are not seeing an employment recovery. We see 490 fewer people actually employed since July. Look at the two spreadsheets below. At the end of 2009, the number of employed in Catawba County settled around 65,000 and has stayed there ever since. And yet, the corrupted Unemployment Rate number has fallen from 15.1% in January 2010 to the current reported rate of 7.3%. This shows the U-3 unemployment rate statistic is irrelevant.

September 2007 to July 2010 - When the downturn began, from the beginning to the end of this period, we see a workforce that begins at 75,900 and ends at 75,600 -- relatively the same. The number of employed falls by 6,714 people between July 2008 and July 2010. The employed percentage falls, while the participation rate remains virtually the same during the period. The unemployment rate rises drastically from 5.3% to a peak of 15.1% before settling in the high 13% range. 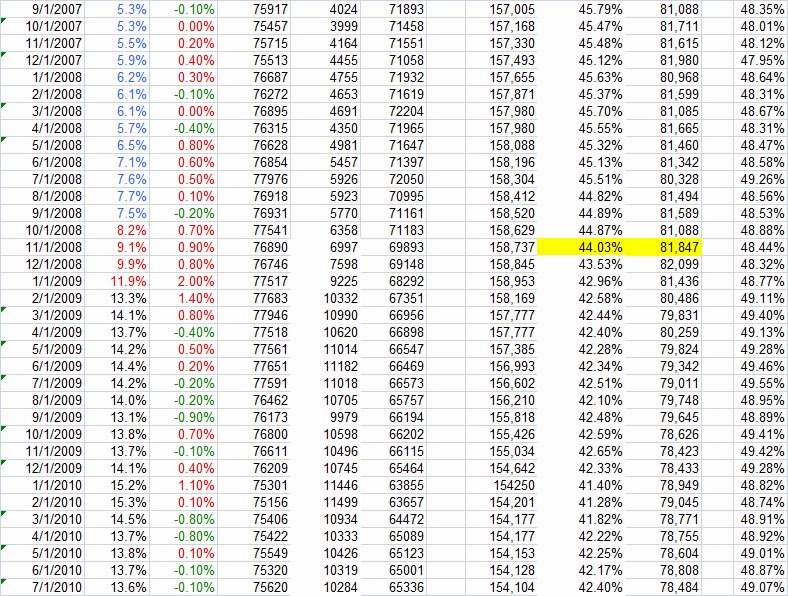 There is no employment recovery and we may head down in the near future. I am almost certain that Catawba County lost population last year. Most people are not going to move here to do absolutely nothing, even people of retirement age. If they were working at all, they would be considered employed. All factors point to economic shrinkage in the area.

The bottom line is that the number one priority needs to be fixing the dynamics of our local economy. I don't see that we are doing enough about rectifying that and the things that have been bandied about are not going to do that.
Posted by James Thomas Shell at 1:40 AM