Dying Memphis Neighborhood Foretells Next U.S. Crisis: Mortgages - Bob Ivry - March 21, 2014 - ... Hope for advancement was that much tougher for most people to sustain after 2008. And just as the crisis was no accident but rather a tragic convergence of stupidity and poor oversight, so too were its consequences a result of calculation.                                Just about all the behavior by the biggest banks and their Washington regulators described in this book occurred after the 2008 financial crisis. The book is divided into seven chapters, each corresponding to one of Catholicism’s seven deadly sins.                            Wall Street’s seven sins -- size, secrecy, regulatory capture (when government supervisors identify more with the industry they police than with the people they’re supposed to protect), excessive pride, complexity, impunity, and a predatory greed -- risk the second avoidable economic cataclysm of the baby boom era...

The Federal Reserve Seems Quite Serious About Tapering – So What Comes Next? - The Economic Collapse Blog - Michael Snyder - March 19th, 2014 - Will this be the year when the Fed's quantitative easing program finally ends?  For a long time, many analysts were proclaiming that the Fed would never taper.  But then it started happening.  Then a lot of them started talking about how "the untaper" was right around the corner.  That hasn't happened either.  It looks like that under Janet Yellen the Fed is quite determined to bring the quantitative easing program to a close by the end of this year.  Up until now, the financial markets have been slow to react because there has been a belief that the Fed would reverse course on tapering the moment that the U.S. economy started to slow down again.  But even though the U.S. middle class is in horrible shape, and even though there are lots of signs that we are heading into another recession, the Fed has continued tapering.
Of course it is important to note that the Fed is still absolutely flooding the financial system with money even after the announcement of more tapering on Wednesday.  When you are talking about $55,000,000,000 a month, you are talking about a massive amount of money.  So the Fed is not exactly being hawkish.                                 But when Yellen told the press that quantitative easing could end completely this fall and that the Fed could actually start raising interest rates about six months after that, it really spooked the markets.                         The Dow was down 114 points on Wednesday, and the yield on 10 year U.S. Treasuries shot up to 2.77%.  The following is how CNBC described the reaction of the markets on Wednesday...


Nationwide Home Sales Collapse: There Is No Recovery and This Chart Proves It - SHTFPlan.com - Mac Slavo - March 20th, 2014 -Now may be the best time to buy a home. At least that’s what the majority of real estate agents in America will tell you if you ask them how the housing market is doing.                           They’ll cite various statistics and give you a “feel” for the market from their personal experiences to convince you this is the case. But if you’re paying attention, then it should be clear that there is, in fact, no recovery in the housing sector. And any gains we may have seen over the last few years are nothing short of a Federal Reserve fueled mirage, much like the stock market.
The following chart from Bank of America is indicative of some serious fundamental problems, not just with the housing market, but the broader economy as a whole... 
Walmart Now Has 6 Types Of Stores - Wall St. 24/7 - Paul Ausick - March 22, 2014 - With the launch last week of a gas station/convenience store, Wal-Mart Stores Inc. (NYSE: WMT) now offers customers six different store formats to choose from, ranging from the Supercenters of up to 260,000 square feet to the 15,000 square-foot Walmart Express stores. The enormous big-box stores still dominate the landscape, but over the past several years the company has been looking at smaller formats, as a way to extend Walmart’s brand footprint, pick up sales it is losing to smaller stores, and gain entry to markets in which they have previously been shut out...


Best & Worst States to be a Taxpayer - Wallet Hub - John S Kiernan  - Economic mobility – that is, our ability to climb the proverbial ladder – has a strong correlation to where we live.  Children from Seattle whose families are in the 25th percentile in terms of income, for example, end up at roughly the same economic stature as kids from the median family in Atlanta.
Why?  State and local taxes.  At least that’s what a group of Harvard and Berkeley researchers collaborating on The Equality of Opportunity Project have to say.  They “found a significant correlation between both measures of mobility and local tax rates.”                      Want to know which states have the most and least burdensome taxes?                          WalletHub analyzed how state and local tax rates compare to the national median in the 50 states as well as the District of Columbia.  We compared eight different types of taxation in order to determine:  1) Which states have the highest and lowest tax rates; 2) how those rates compare to the national median; 3) which states offer the most value in terms of low taxation and high cost-of-living adjusted income levels. 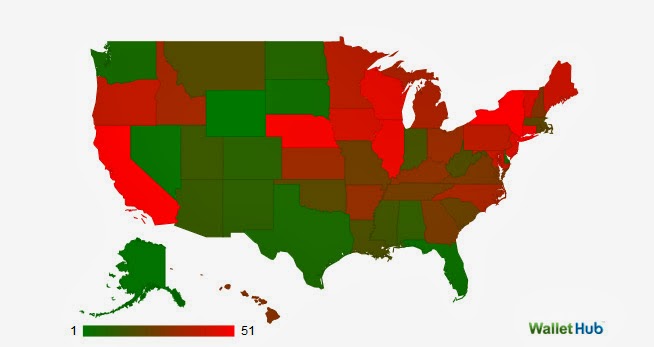 Posted by James Thomas Shell at 1:57 AM