David Stockman interviewed by Greg Hunter - USA Watchdog - January 31, 2016 - Former White House Budget Director David Stockman contends, “We are nearing the end. I think the world economy is plunging into an unprecedented deflation recession period of shrinkage that will bring down all the markets around the world that have been vastly overvalued as a result of this massive money printing and liquidity flow into Wall Street and other financial markets.”

On gold, Stockman says, “I think it’s more of an insurance policy and an option on the ultimate failure of today’s form of central banking. When, finally, the Keynesians, who are running all the central banks, when they are totally repudiated, I think gold will soar in value.”

Dow falls 223 points after Federal Reserve statement - CNN - Patrick Gillespie - January 27, 2016 - At the end of its two-day meeting Wednesday, the U.S. central bank acknowledged that the U.S. economy lost momentum at the end of 2015.


We Are Getting To The End - SGT Report - Nomi Prins - January 31, 2016 - Nomi Prins, the Best selling author of All The President's Bankers, joins me to document the collapse of the western banking and economic systems. Nomi says, "We're getting to the end of what's possible in terms of stimulation, I would have thought the end should have happened years ago. But the reason it didn't was because of the epic coordinated efforts between the major central banks... and that element has left markets with the APPEARANCE of health they haven't actually had because of true growth. And there's only so much you can do of that. These are desperate actions."

Gerald Celente on USA Watchdog with Greg Hunter - Trends researcher Gerald Celente predicts, “It’s a global recession and it’s already on. What they could do to prop up the stock markets, I don’t know, but our forecast is they won’t be able to. It’s also very important to understand that the people will not blame Obama for the declining economy. They are not tuned in enough, and they have been pushed down to I don’t care and I don’t believe in hope and change anymore. It will be neutral as to the party preference.”

On the upcoming 2016 election, Celente says, Conservatives aren’t conservative anymore and liberals aren’t liberals anymore. . . . We see it as Trump and Clinton, at this point, and Trump is not going to get the woman vote. At this point, I think Clinton can beat Trump.”

On the subject of the stability of the banks, Celente says, “The only money I keep in a bank is money to run our business because here is the deal. If there is a terrorist strike, false flag or real, there will be a bank holiday and . . . bail-ins. The global banking system is in a bear market. China . . . Japan . . . . France bear market . . . UK is in a bear market. We are told everything is going to be okay. I wouldn’t put my money in the banks and I’ll tell you why. (They’ll say) We got your money and will give it back if and when we want to. Look what happened in Greece. Look what happened in Cyprus. . .”


Max Keiser on Infowars - Alex Jones talks with expert economist Max Keiser about the current state of the American dollar as well as the Russian Ruble. Speaking from Red Square in Mockba about Currency issues,  China's implosion and warnings to George Soros, Deutsche Bank and European QE, the failure of QE, Deflation, Putin and Russia, Donald Trump and the Presidential election, the Kleptocrats, Oil implosion and Shale, Gold, Flint, Michigan's poison water and infrastructure falling apart...

Posted by James Thomas Shell at 1:29 AM 0 comments

Economic Relevance - Catherine Austin Fitts - You don't get away with anything

Catherine Austin Fitts of the Solari Report and Solari.com was on the Jeff Rense show - Internet Talk Radio. She spoke of the elite running the world and related a story from Carl Jung, colleague of Sigmund Freud and founder of analytical psychology.

Catherine relates Jung's story of a manipulative, aristocratic woman whose life decisions lead to loneliness and despair -  http://solari.com/blog/wp-content/uploads/2010/01/memories-dreams-reflections-psychiatric-activities.pdf - from Karma Means You Don’t Get Away With Anything

She speaks about the cultural debasement of Western Civilization, relating it in part to entrainment through television and smart phones. Entrainment is bringing human thought processes into the synergy of the collective. Essentially cult behavior - a manner to control the masses.
Posted by James Thomas Shell at 8:38 AM 0 comments

Hound: Saw this message from Robert Griffin III. The reporter from ESPN says that it was posted all season long. I still think he can play at a high level, but that is neither here nor there. Deal is that the mainstream press builds people up in order to tear them down. They latch on to a simple narrative and run with it and force momentum to fit their agenda. They don't care about the facts. The presstitutes are just weaving some funky concoction to spoon feed to their sheeple.

My question is what did RG3 ever do to deserve such disdain?... The Darkness is amongst us. 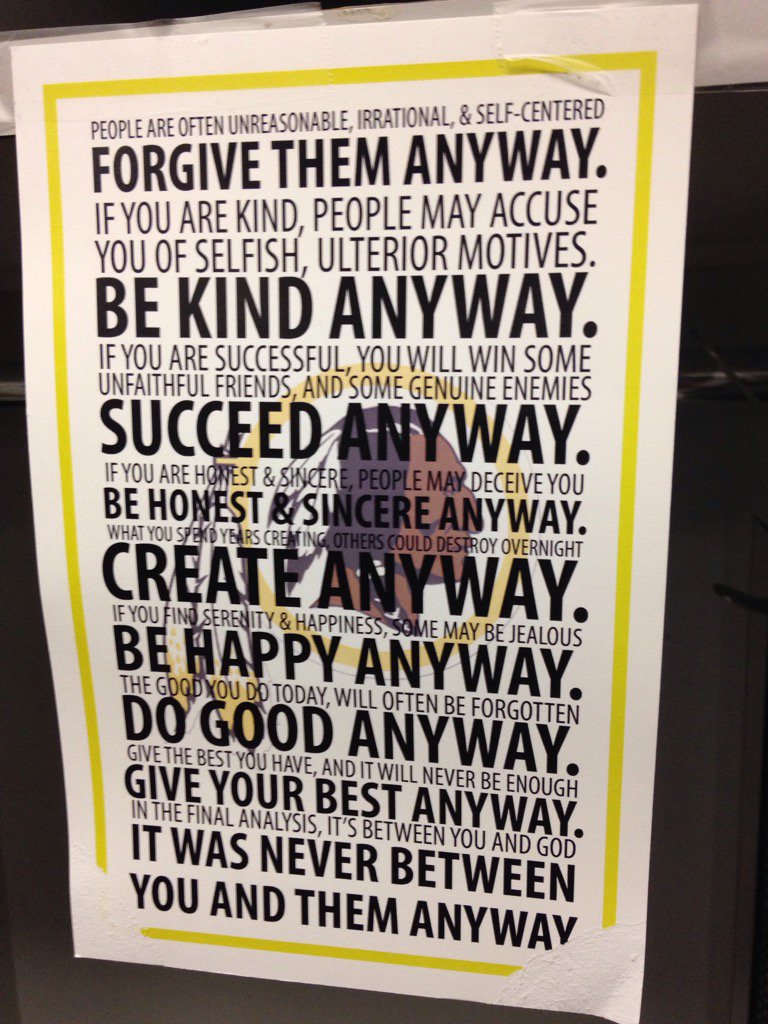 This won't take long. I still like posting, but have grown weary of long, thought out posts. I'm going to change how I cover City Council meetings and how I address local issues. It's time to change focus. You can only spend so much time addressing something that is broken to the degree I have with that subject matter. I will comment, but you'll have to watch their videos and read their minutes to get the details. Most people have shown, in my opinion, that they don't care what I think.

All politics begin at the local level, but one man or ten can't change things. Others talk about the necessity of fighting the good fight on the local level, but I don't see them expending the energy themselves. I'll continue to pay attention and make commentary on the issues, but I can't afford to spend 20 to 40 hours a week on this site.

I don't see the rosy scenario some others espouse. The intelligent people that I know talk about leaving the area, because they can't economically progress here. They talk about their children leaving and not coming back. They encourage me to leave, so that I can fulfill my professional destiny. A lot of people that feel it necessary to publicly say good things about the area, tell me that "off the record", this place is shot and won't come back any time soon.

The Big Economics picture is what is most relevant:

Stock Market Crash 2016: This Is The Worst Start To A Year For Stocks Ever - The Economic Collapse Blog - Michael Snyder - January 7, 2016

Posted by James Thomas Shell at 6:01 AM 0 comments

Hickory Hound: Who is really looking out for residents of Hickory Public Housing? What Sidney Miles is arguing in the letter presented below is not what the City is addressing. Taxpayer Funds were misappropriated based on Federal Government findings and funds were not accounted for over a multi-year period. The City is taking the logical step based on HUD's finding and their real authority and handing over the authority to a non-political agency - the western Piedmont Council of Governments. This doesn't have much of anything to do with the property on 4th St SW or RAD program. This letter is an effort to draw attention away from the real issue -- corruption!

This doesn't absolve the City for its lack of action over the past nearly 4 years, since this all came to light. This has cost hundred of thousands of dollars. These actions have in no way been beneficial to the residents of Hickory Public Housing and there have been people who were fired for speaking up against the corruption. 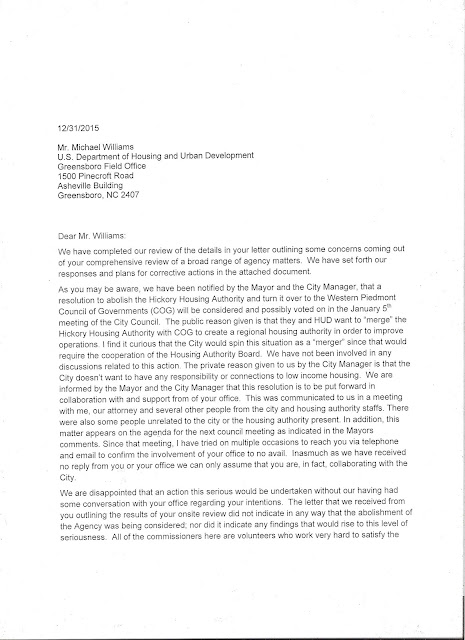 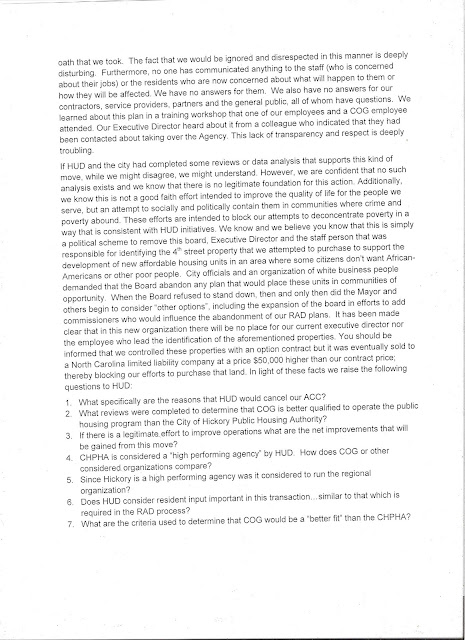 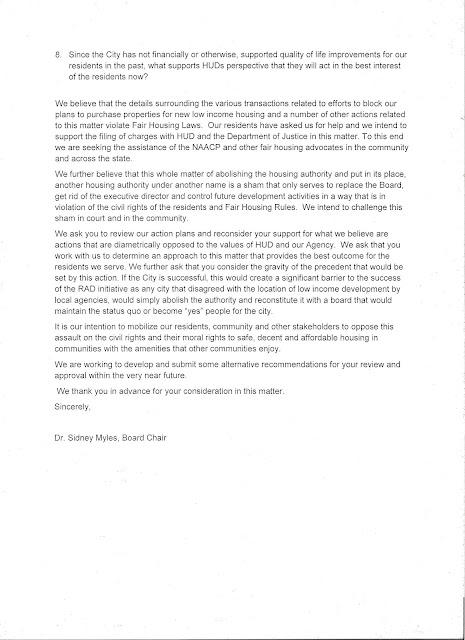