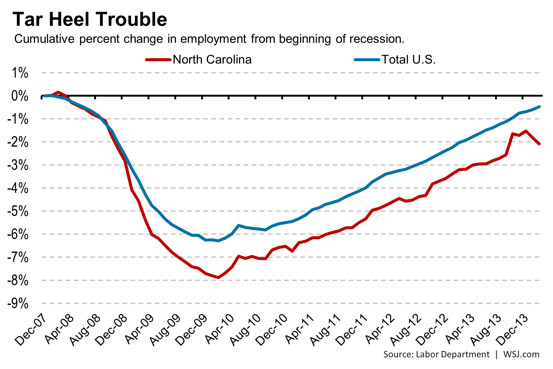 Hickory Metro 2014 - Tied for 4th Most Miserable in the United States - March 25, 2014 - Gallup through Hickory Hound - March 25, 2014 - The Hound: From dead last in 2010 to 5th worst last year to tied with three cities for 4th worst this year. We aren't the worst in any category this year, but we skew towards the bottom in every category, which includes obesity, exercise, eating fruits and vegetables, smoking, stress, and the uninsured. Is College A Waste Of Time And Money? - The Economic Collapse Blog - Michael Snyder - March 26th, 2014 - Are you thinking of going to college?  If so, please consider that decision very carefully.  You probably have lots of people telling you that an "education" is the key to your future and that you will never be able to get a "good job" unless you go to college.  And it is true that those that go to college do earn more on average than those that do not.  However, there is also a downside.  At most U.S. colleges, the quality of the education that you will receive is a joke, the goal of most colleges is to extract as much money from you and your parents as they possibly can, and there is a very good chance that there will not be a "good job" waiting for you once you graduate.  And unless you have someone that is willing to pay your tuition bills, you will probably be facing a lifetime of crippling student loan debt payments once you get out into the real world.  So is college a waste of time and money?  In the end, it really pays to listen to both sides of the debate.
Personally, I spent eight years at U.S. public universities, and I really enjoyed those times.
But would I trade my degrees today for the time and money that I spent to get them?
Absolutely...


Will the fixed-rate mortgage become extinct? - CNBC - Jeff Cox - March 26, 2014 - While homes will evolve considerably over the next 25 years, it is the way homes are purchased that will bear the heftiest transformation.                     As the current path progresses, mortgage financing will look worlds apart from its current form. The government won't be offering the same guarantees as it's been for generations, big banks won't have the same incentives to get in the business, and borrowing rates will be considerably higher as regulation continues to increase.                     Interviews with numerous pros in the business paint a picture of big changes to come—not all of them consumer-friendly. Most spring from a dual dynamic of the government seeking to avoid calamities like the one that triggered the financial crisis in 2008 and the industry trying to innovate and continue to profit in a more restrictive environment.                      "Even in normal times, we are going to see in all likelihood higher rates, particularly for less-than-stellar borrowers," said Greg McBride, chief financial analyst at Bankrate.com, which provides consumers with information about the latest borrowing data and trends. "Anybody who's got a smaller down payment, some weakness in their credit history or isn't fully documented is going to face the hurdle of higher interest rates and potential limited credit availability."                   That may not sound like a terribly bad thing to some ears....

Paul Craig Roberts Interview on King World News - March 27, 2014 - Former US Treasury Official, Co-Founder of Reaganomics, Economist & Acclaimed Author - Dr. Paul Craig Roberts is an American economist, a columnist and recent author of “The Failure Of Laissez Faire Capitalism” -  Dr. Roberts speaks about the current situation in Ukraine and what it means to Global Dynamics and how that relates to Russia, the United States, and the Obama Administration.


NASA Predicts "Irreversible" COLLAPSE of Society
NASA has stated what we've all known for some time now. The inevitable will occur at some point in the future. When a society has accumulated too much debt and the wealth is in the hands of too few people, the world will turn upside down. Chaos will occur. Mass civil unrest will take place. Those prepared will fare best in this new era.﻿